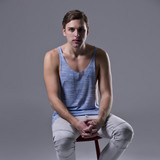 Music be the only sound that drives him, up and coming DJ/producer NICKYP is ready, set and go - determined to play the game of it and shoot to high score. His relentless energy reaching out far beyond his home base of Las Vegas, Nicholas Potoczny is the roar of Hard Dance. It’s only a matter of time until his story unfolds, telling us all about a promising career and future. Few things other than music would be able to lock the attention of a young Nicholas. Growing up a curious teenager, he explored the entire spectrum of music before finding his one true love in Melodic Hardstyle and elements of Mainstream EDM. The energy of nightlife was calling, and boy, did he hear it. Landing a residency with one of America's largest Hard Dance Promoters "Elation", based out of Sin City. Along with rocking the decks of legendary NYC venues such as Pacha, Highline Ballroom, and Webster Hall. Across the states to Austin's Shakespeares (SXSW), Miami's famous Clevelander (MMW) and Las Vegas's Fremont Experience (EDC Week), no venue was safe to the raw talents of NICKYP. The night lights forever lure, and hold NICKYP in a tight grip to this very day, enraptured from the first until the very last beat. Storming America's finest rooms, facing ever-growing, maddening crowds, he has proven to be an outstanding DJ, with stamina for the bigger, better and greater things the scene has to offer.