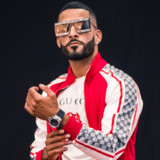 Fariss Boukili known as DJ FUBU is an Urban DJ and PRODUCER From Morocco Based in Spain . Banging anthems have carved the landscape. Allowing for the new age revival of urban HIPHOP AND TRAP. He is supported by some of the biggest djs and rappers around the world including Bob Sinclar, Juicy M, Lacrim, Sch, Maes, Alonzo, Rim’k, Mister You, DJ Abdel, Dj Cut Killer, L’algerino, and much more... he’s a master of the dancehall and the Hiphop beats . In 2016 he started to build he’s own label now dropping music with he’s label FBE RECORDS