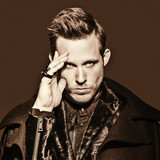 Aaron Kowal is an enigmatic Canadian pop act who blends emotive songwriting with high-energy, dance-driven performance and a mysterious electronic sound. His artistry is thematic, visual and provocative, and his narratives touch on the psychology of a generation. Living within the realm of contemporary pop, his music is highly inspired by the electropop and dancepop of recent decades, with his personal style drawing from the eclectic range of genres and instruments he was exposed to in his youth. Through the integration of unique and unusual sounds and melodies, he provides a novel contribution to the modern pop scene. Working with producer/songwriter Doug Romanow, Aaron released his first single “Confetti” in 2018 and a follow-up EP titled “Good Sins, Bad Decisions” the following year. The lead single “Love Is Love” saw success on radio and playlists across the country, appearing on CBC’s Pride playlist among others. His upcoming body of work represents a new era for the artist. A transition from the upbeat, playful sound of his earlier catalog, this new music reflects a more open and honest sound that embodies modern pop music in it’s truest form. Aaron returns on January 29th with “Phobia” - the first in a collection of songs addressing trust, uncertainty, and the anxieties of the age.