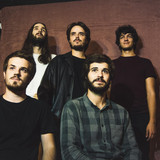 Dream People are one of the most promising bands in current Portuguese music. They’ve recently sold out one of the biggest venues in Lisbon, Teatro Maria Matos and released ‘Dream People Live on Mars’, the first concert ever on the Red Planet. The passage of Time unites all of their songs. Between epics of sorrow and reflections on the frustrations of life, this is where Dream People find their starting point. They come into the spotlight with 'Forever Too Long' which is followed by 'Soft Violence' (2020), EP that takes the band to iconic festivals like Vodafone Paredes de Coura Festival, and is considered one of the best records of 2020 by prestigious Spanish magazine Mindies. In 2021 they release 'Almost Young', an album that has conquered the public and the critics alike, being dubbed as "the most beautiful moment of Portuguese music in 2021". It premiered on national television and MTV, and was presented all over Portugal, with the national tour culminating in a memorable concert at Lisbon's historic Teatro Maria Matos. Recently, they were also selected to represent Portugal in two of the biggest showcases of the music industry, ILMC (UK) and Canadian Music Week (CAN), alongside artists like Lina_Raül Refree and Surma. As for their next step, Dream People decided to surprise everybody, ‘Live on Mars’, the first concert ever on the Red Planet, is the definitive proof that they are one of the most promising bands of recent times. The future is abundant.