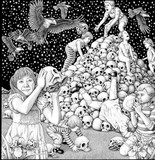 Light Screamer Ida Andersson-Norrie: vocals, bass Jens Hellman: guitar Johan Kekki: drums “By far one of the most interesting noise rock bands coming out of Sweden lately.” - Into the void Light Screamer are well-known for their intense and chaotic live shows, something that led them to SXSW in 2013 and 2014, and a record deal with Austin label Australian Cattle God Records for their debut album, Gauss. In 2018, they released their follow-up, Switch, on the legendary Örebro label Zorch Productions. Two years later, in the midst of a world-wide pandemic, their suitably named third album, Reap, was released. The award-winning Austin artist, Win Wallace, has created the covers for all three albums as graphical interpretations of the music. Light Screamer’s albums and live shows have gotten excellent reviews and musicians such as Paul Leary (Butthole Surfers) and Brett Bradford (Scratch Acid) have been praising the band. Slavestate magazine awarded Light Screamer with best live performance in both 2015 and 2019. “There are few bands that in such a convincing and concise way manage to out do themselves.” - Slavestate Magazine Light Screamer was formed in Örebro, Sweden, in 2011 by Ida Andersson-Norrie, Jens Hellman, Peter Lindström and Tobias Eriksson. Tobias left after the recording of Switch leading to the band adopting to a three-piece line-up. Reap marks the end of an era since it is the last album recorded with Peter on drums. After Reap, Johan Kekki joined on drums.