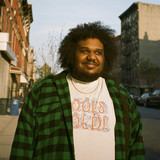 Born and raised in Boston, Michael Christmas broke into the national hip-hop scene in 2014 with the arrival of his debut mixtape 'Is This Art?' The project’s rapturous response landed him direct support slots on back-to-back tours with Logic and Mac Miller, which were followed in 2015 by his sophomore project 'What a Weird Day.' The album drew widespread critical acclaim from the likes of Fader, VICE, XXL, MTV (who dubbed him "your favorite every-dude rapper"), amongst many others. Christmas has been a consistent presence on the live circuit ever since, highlighted by standout performances at Lollapalooza and Boston Calling, tours with What So Not and Tunji Ige, and guest appearances on Fool’s Gold DAY OFF shows that teased his collaboration with the beloved indie label in the form of his third album, 'Role Model.' Christmas has honed his lyrical talents and immensely charismatic presentation on the road, and channeled it all in the studio while taking the time to perfect his upcoming album.