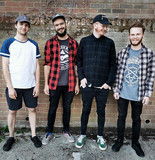 Floods in Japan was formed in 2020 by Stuart Palmer and El Tyler of Kent band, Hounding, whilst traveling home from an itoldyouiwouldeatyou show. With this being the 3rd band to have formed from this partnership, the pair endeavoured to create a space separate from their other projects to explore a genre of which they are heavily influenced by. Drawing influence from the likes of pageninetynine., Orchid, and Rites of Spring they invited friends and frequent collaborators, Ewan Bennett and Laurence Crow on board to finalise the lineup.