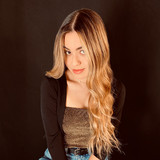 Ariel is a 18 year old alternative pop artist from Tucson, Arizona. She has performed throughout the state of Arizona at multiple different venues including The Park Street Food Bar, The Rialto Theatre, and Paradise Valley Community College. She was featured on Glamour Magazine's "You Sang My Song" - the Ross Lynch episode, and placed 2nd in Avondale's Got Talent in Fall of 2018. Her newest single, "Thoughts", is out now. Her first EP titled, "Golden Aces", was released in August of 2016 when she was 13 years old. Ariel is currently writing and recording new music that will be released soon.