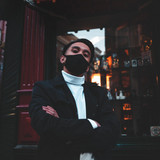 “Music has no limits” is the first thing Henri says about his passion for music. Henri Victory, born in Jakarta, Indonesia. He's a Midtempo Bass / EDM producer and DJ who understands his profession and he also likes to share his love of electronic music. Henri Victory grew up in a musical environment; He started his career as a Marching Band player and he has competed and won many competitions in Indonesia. Besides, he has built up a lot of experiences in the cultural side of Indonesian music during his youth. Henri moved to the Netherlands in 2011 to expand his musical dream. He started as a Diskjockey at the age of 14 and during his DJ career, he realized that music production is something he is looking for. The Henri Victory project started on January 1st, 2019, and he had a plan to go into the future House side. After a while, he likes to experiment with different sounds and works completely outside the rule. In 2020 he decided to switch from his style to Midtempo Bass & Electronic Music. Henri Victory is a “Victory” project. He thinks music has no rules and manuals. However, he always finds a way to show his inspiration to everyone. "Push the boundaries" is what he believes in. Henri Victory has released his track on various labels called Dutch Music Records, No Copyright Future, Bass Rebels, and Recall Renaissance. He has also collaborated with various artists such as Merow, Jimmi Rider, Marvision, Merlin, Next Order, and Paula Scotto di Minico.