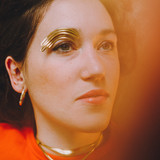 Johanna Amelie is a Berlin based multi-instrumentalist, singer/ songwriter, producer and activist. She writes folky, dreamy and modern songs about anything that moves her, observing her own state of mind, romance, death, human behaviour and the world around her. "I wish to create a connection to others through music,“ says Johanna Amelie’s ambition. After having played 300 concerts worldwide and after having released 2 albums and 2 EPs - her new record called "FICTION FORVER" will be out in April 2022.