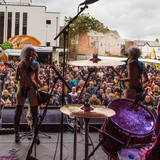 While the world stands still, the fearless French-born sisters Millie and Mie have persevered at the polar opposite, embracing 2020 and news of cancelled tours to deliver over 100 live-steamed shows and counting, taking fans on a raucous virtual worldwide tour, from country to country, theme to theme, and with not one set, costume or theme the same [view on YouTube]. Now in 2021 and with their virtual tour still in full-swing, The SoapGirls took to the idyllic beaches of Cape Town and a once-thriving beach-side entertainment venue to film ‘Heart In Bloom’, blending encapsulating choreography and cinematic visuals, to accompany hook-filled melodies, over driving musicianship. The start of what’s to come as the debut track from their long-awaited fourth album. Armed with unforgettable melodies and catchy choruses, The SoapGirls energy, rawness and authenticity has earned them a formidable reputation. From starting out as street performers selling soap at the ages of 8 and 9, The SoapGirls have gone on to deliver scintillating performances internationally at the likes of Rebellion / Camden Rocks Festival, landing features in the likes of Classic Rock Magazine / The Mirror / Vive Le Rock, slaying critics, breaking off major label deals, and continue without compromise amassing a global group of dedicated followers, provoking enviers and haters on their way. Cinematic, audacious and straight from the heart; watch / stream The SoapGirls new anthem ‘Heart In Bloom’ via all outlets