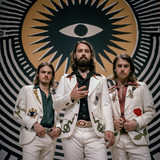 DeWolff is not a band to sit still. They've released four albums in the last three years – Wolffpack (2021), Tascam Tapes (2020), Live & Outta Sight II (2019) and Thrust (2018) – and toured relentlessly across Europe enriching the continent with their Psychedelic Southern Rock, selling out shows and picking up awards along the way. They are also not ones to paint by numbers – Tascam Tapes was recorded on the road with a four-track cassette recorder from the 1980s, and recorded in hotels, motels, a backstage or two and by the side of the road. Watch the documentary on it online. They then gave fans exclusive access to listen ahead of release via a hotline number. They also teamed up with friends Dawn Brothers to release the collaborative Next of Kin EP.   In their studio bunker in the Medieval town of Utrecht, The Netherlands, during the global lockdown, brothers Pablo and Luka van de Poel and Robin Piso have created another majestic record with WOLFFPACK. Experimenting with hazy soundscapes, fizzing riffs, marauding organs, infectiously free-roaming melodies, and all tied in with an undeniably DeWolff sound. Liberators of the funky groove, they're riding the highways swerving in an out of 70s soul-funk, fuzzed-up psychedelia, swamp-rock and haunting melancholia, with their shades on, convertible top-down and radio on, their sights are set on the horizon.