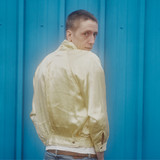 Jonas Alaska is the performance alias of Norway's Jonas Aslaksen, an indie pop singer and songwriter inspired by the singer/songwriter era of the '60s and '70s. Born in Åmli in 1988, the multi-instrumentalist studied music in England at the Liverpool Institute for Performing Arts. His eponymous debut album of spirited folk-rock arrived in 2011 and not only reached number five on Norway's album chart, but earned the artist three Spellemann nominations -- that country's equivalent of the Grammys -- in the categories Best Songwriter, Best Male Artist, and Newcomer of the Year; he won the latter. Released by Sony, 2013's If Only as a Ghost outdid his debut by one spot on the charts and brought the singer continued comparisons to Paul Simon, with whom he shares a similar vocal tone. Offering more electronics and grittier guitar work, 2015's Younger was Alaska's first to be written on electric instead of acoustic guitar. It reached Norway's Top 20. His fourth long-player, Fear Is a Demon, followed on Braveheart Records in 2017. ~ Marcy Donelson, Rovi