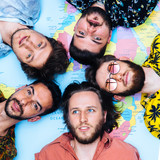 During a trip around the world new impressions and acquaintances are almost guaranteed. Moritz and Solen had that fate when they met traveling across South America. There, they became backpacking buddies and started to write music on their now common journey. When later the desire to settle down arose, it was time for them to separate again. Neither of the two could have guessed that the adventure was not at all to be over yet. Moritz moved to Vienna, where he met Simon, who himself had only recently returned from a South American adventure. With a common passion for music and travelling as a foundation, their friendship flourished in a quite productive collaboration in songwriting. At the same time Solen moved to Morocco. In his thoughts, never detached from the musical vision that emerged between mountain peaks and desert campfires, he soon made a decision: “Vienna it is!” As quickly as he had set up his tent in Morocco, he took it down again and moved to the Austrian capital. However, it just wouldn't work to be the band they wanted to be until Julian and Florian joined in. They completed the game. DESERT MAY BLOOM was born. Well, a blooming desert, that's exactly what they sound like: Eternal horizon and blazing sun. If you sometimes feel like leaving everything where it is and just sail away, Desert May Bloom is the sound you want to take with you. Their music screams for wanderlust, a new start and adventure. A good travel companion guaranteed.