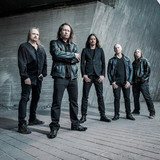 One of the most influential power metal groups to come out of Europe, Finland's Stratovarius emerged in the mid-'80s alongside genre heavyweights like Helloween, Gamma Ray, and Blind Guardian. Employing a versatile blend of hard rock and progressive, symphonic, and neo-classical metal, the band has issued over a dozen studio LPs since debuting in 1989, with highlights arriving via 1997's ambitious, Nostradamus-inspired concept album Visions, 2003's two-volume Elements, and 2013's grandiose Nemesis, all three of which topped the Finnish charts. Despite enduring myriad lineup changes over the years -- in 1995 there were no founding members left -- Stratovarius have remained remarkably prolific, and have maintained a loyal fan base both at home and abroad. Originally called Black Water, the group was formed in 1984 by singer and drummer Tuomo Lassila, guitarist Staffan Stråhlman, and bassist John Vihervä. By the time of the release of their debut album, Fright Night, in 1989, the band was operating under the Stratovarius moniker, and had added keyboardist Antti Ikonen and replaced Stråhlman with guitar virtuoso Timo Tolkki, the latter of whom would go on to serve as the group's de facto leader. Twilight Time and Dreamspace arrived in 1992 and 1994, respectively, and helped to establish the group in Japan, where they would enjoy enormous popularity throughout the years. A flurry of personnel shifts occurred during this period, the most notable of which was the arrival of vocalist Timo Kotipelto, who after the departure of Tolkki in 2008, became the group's longest-standing member. Following 1995's Fourth Dimension, the lineup included Kotipelto, Tolkki, bassist Jari Kainulainen, ex-Yngwie Malmsteen keyboardist Jens Johanssen, and drummer Jorg Michael. This lineup added a choir and orchestra for 1996's epic Episode and 1997's narrative-driven Visions, the latter of which was released in the U.S. early in 1998 and would go on to become the band's most successful outing to date. American reissues of most of Stratovarius' previous output followed over the course of the year, and in the spring of 2000 the group issued Infinite, which reached number one on the Finnish charts. The aptly named Intermission, a compilation LP of B-sides, bonus tracks from previous albums, and unreleased material, arrived in 2001, followed by a period of downtime that saw Tolkki and Kotipelto issuing solo albums. The band reconvened in 2003 for the arrival of the ambitious double-LP Elements, which was split into two separate releases. During this time tensions within the group had escalated, prompting Stratovarius to officially, although briefly, disband -- Tolkki suffered a nervous breakdown and was eventually diagnosed as bipolar. In 2005, after a period of rehabilitation, Tolkki returned to the fold and the band released a self-titled 11th studio long player. The album, which saw the group deliver a more streamlined and decidedly less symphonic set of material, proved divisive for both fans and the band, and by 2008 Tolkki, who held the rights to both the name and the royalties, decided to put an end to Stratovarius. He eventually signed over the rights to Timo Kotipelto, Jens Johansson, and Jörg Michael, who enlisted new guitarist Matias Kupiainen and bassist Lauri Porra for the group's 12th effort, 2009's well-received Polaris, which marked a return to the pageantry of the band's earlier works. A 2010 EP, Darkest Hours, preceded the arrival of the band's next studio LP, 2011's Elysium, which spent nine weeks at the number one spot on the Finnish albums charts and included their longest track to date, the 18-minute title cut. Longtime drummer Jorg Michael left the group for health reasons the following year, and was replaced in 2012 by new kit man Rolf Pilve, who made his debut on 2013's Nemesis, which featured a guest appearance by Sonata Arctica guitarist Jani Liimatainen. 2015's Eternal saw the group collaborate once again with Liimatainen, who co-wrote three of the tracks, and in 2018 the veteran Finnish metallers issued Enigma: Intermission 2, a sequel to 2001's Intermission that included previously unreleased material, along with three brand new songs, and four newly arranged orchestral versions of popular tracks from their extensive catalog. ~ James Christopher Monger, Rovi