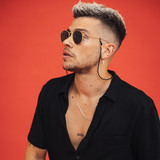 Australian recording artist Brendan Mosca AKA 15grams is just getting started. From humble beginnings as a bedroom DJ to host of his own infamous boat parties in the Sydney Harbour, 15grams has already supported monumental artists like Axwell, Martin Garrix, Hardwell and the one and only, Avicii. His inspired mixed platform performances as a DJ & hype man have earned him residencies at iconic global nightlife destinations such as Marquee at The Star Casino, and Paradise Club, Mykonos. With promise to follow in the footsteps of fellow Aussie artists who have pathed the way for international recording recognition, 15grams is fast gaining the attention of overseas tastemakers. His first international release titled ‘Dreaming’ was signed to Canadian EDM giant Monstercat. In an unprecedented pivotal year for the music industry, Brendan took 2020 on as an opportunity to hone his skills as producer and identify with the sounds that mean the most to him as an artist. A few projects later and 15grams signed a major label deal with Famouz Records, a JV with Sony Music in Germany – the pinnacle region for any recording artists’ success in Europe. Now being featured in some of the biggest Spotify curated playlists on the platform, the hypnotic hooks of 15grams are climbing their way onto airwaves and beyond. It’s only a matter of time before 15grams is weighing in on the international dance scene in a big way.