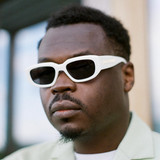 Badi teamed up with the producer Boddhi Satva and his avant-garde ideas. Where the sounds of Boddhi Satva invite the listener to dance until dawn, Badi's words shake consciences and upset certainties. Facetious dandy, he questions the world and shakes up trends. It's because the Belgian doesn't have his tongue in his pocket. The kind who sings what others whisper, who says loudly the proletariat realities, Badi smiles but is not wrong. Over lush melodies, his lyrics underline the deficiencies of a failing society. This is perfectly evidenced by Mauvaise Ambiance, the opening opus on an album driven by extra-large convictions. Between ultimate disenchantment and absolute hedonism, cry of resistance and song of heart, Badi captures the mood of the times. In line with the Black Lives Matter movement, the artist raises his voice without violence excess. Far away from controversies, away from the statues, he debunks prejudices and fights against ignorance through this great song of defiance. Between Africa and the Western World, he evokes Virgil Abloh in an eponymous track; a track approved by the designer himself. Artistic director for Louis Vuitton, this man is an Haute-Couture symbol. Badi’s passion for clothes also takes shape in the chorus to Kitendi, an ode to the SAPE (Société des Ambianceurs et des Personnes Elégantes, literally the Society of Ambiance-Makers and Elegant People) and a tribute to its protestor ethos.