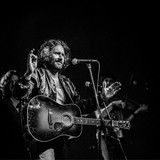 Get as hot and bothered as you want about the newest names hitting the independent country scene, but those who know their stuff know that Leroy Virgil and Hellbound Glory are some or the original country insurgents of the modern era who helped turn country music upside down, and open the doors for many of today's heavy hitters. Now Hellbound Glory is getting ready to release a new album called Pure Scum. Produced by Shooter Jennings and recorded in L.A.'s Echo Park neighborhood, it features eight new songs from Leroy with a couple rearranements of traditionals, and wrecking crew of studio musicians that includes many principles from the Shooter camp, including steel and lead guitar player John Schreffler, Ted Russell Kamp on bass, and Aubrey Richmond on fiddle. "This album is the most classic country album Hellbound Glory has ever made. It's also the scummiest," Leroy Virgil tells Saving Country Music. "We recorded it live in two days. All the vocals are live takes."