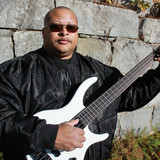 Donald Wayne King is a bass player/music producer from New York. He has been featured in newspapers and top media outlets like Bass Musician Magazine. He has garnered millions of views on his social media worldwide. He created his own genre of jazz music called Lo-fi Hip Hop Funk where he incorporates boom bap hip hop with funk and blues. Donald enjoys playing live for his fans in the Connecticut area. He wants to tour with some of the bass legends in the future.