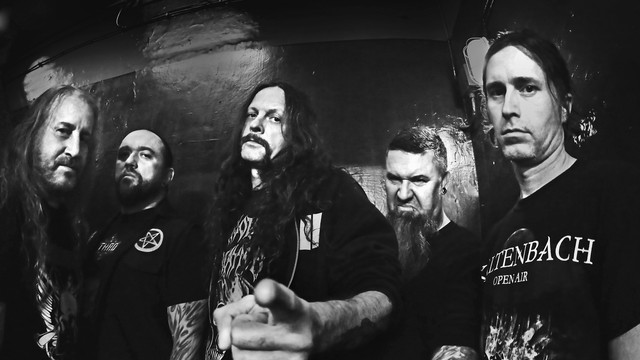 Arising from the heavy metal hotbed of Florida in the early '90s (but originally from Buffalo, New York), Malevolent Creation helped define the sound and style of American death metal. After issuing their seminal 1991 debut, the gore-soaked Ten Commandments, the band underwent some personnel and stylistic changes, moving toward a more progressive, technical death metal sound that they continued to mine on subsequent outings like Eternal (1995), Warkult (2004), Invidious Dominion (2010), and The 13th Beast (2019). Initially inspired by the sonic and lyrical extremity of Slayer, the group landed a deal with Roadrunner Records at the dawn of the '90s, featuring a lineup of vocalist Brett Hoffmann, guitarists Phil Fasciana and Jeff Juskiewicz, bassist Jason Blachowicz, and drummer Mark Simpson. Their 1991 debut album, The Ten Commandments, became something of a landmark in the death metal underground, expanding on the early work of Slayer and fellow Floridians Death. Its sequel, 1992's Retribution, was just as strong, featuring two new members added from Solstice -- guitarist Rob Barrett (who replaced Juskiewicz) and drummer Alex Marquez. Barrett and Marquez were replaced by John Rubin (who had been in a very early lineup of the band) and "Crazy" Larry Hawke for 1993's Stillborn, which disappointed many of the group's faithful and signaled an acrimonious end to their relationship with Roadrunner. Those label difficulties nearly broke Malevolent Creation apart, but they eventually resurfaced on Pavement Music with a more progressive, technical approach and a revamped lineup on 1995's Eternal. Hoffmann was gone, with the vocals now handled by bassist Blachowicz, while guitarists Fasciana and Rubin were joined by ex-Suffocation drummer Dave Culross. The remixes/outtakes/demos collection Joe Black appeared in 1996, followed the next year by In Cold Blood, which featured guitarist John Paul Soars taking Rubin's place, and drummer Derek Roddy replacing Culross. For 1998's The Fine Art of Murder, Fasciana (now doubling on keyboards) brought vocalist Hoffmann, guitarist Barrett, and drummer Culross back to the fold, along with new bassist Gordon Simms. The Pavement label retrospective Manifestation appeared in 2000, followed near the end of the year by the all-new Envenomed. The sequel to Envenomed came out two years later, followed a few months afterward by drummer Justin DiPinto's last album with the group, The Will to Kill. The band continued to stay productive, releasing Warkult in 2004 and Doomsday X in 2007. In 2010, Malevolent Creation released their 11th studio album, Invidious Dominion. In 2014, they inked an international record deal with Century Media, and in 2015, released their first studio album for the label, Dead Man's Path. Sadly, it would be the last Malevolent Creation outing for Hoffmann, who left the fold the following year and subsequently passed away in 2018 from complications stemming from colon cancer. In January 2019, the group issued their 13th studio LP, The 13th Beast, with a lineup consisting of Phil Cancilla (drums), Josh Gibbs (bass), Phil Fasciana (guitar), and new vocalist/guitarist Lee Wollenschlaeger. ~ Steve Huey, Rovi