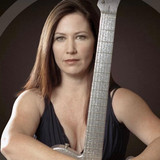 Kathy Valentine has been a working musician and songwriter for over 40 years, most notably as a member of the Go-Go’s, a band that made music history. Kathy co-wrote the Go-Go’s hit songs "Vacation" and “Head Over Heels.” Her first book, “All I Ever Wanted: A RocknRoll Memoir” was released in Spring, 2020 to widespread acclaim. Intersecting her story-telling with her songwriting skills, Kathy wrote, performed and recorded a soundtrack of fully original songs and music to accompany her memoir. Valentine has found a variety of on-going opportunities as a keynote speaker, spokesperson, actress, producer, and college student. In 2017, she created the “She Factory,” an event series to raise money for women-centered non-profits. The Go-Go’s have continued to build upon their legacy with a feature length documentary that premiered on Showtime in August 2020, and the Broadway musical “Head Over Heels.” Music is always first and foremost in her creative pursuits. Kathy still shows up for gigs with her rock band The Bluebonnets, in her hometown of Austin, Texas, where she resides with a teenage daughter she says is her “greatest pride and joy.”