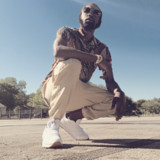 Jhakari Marquise Shaquill Holloway, Known professionally as Jhakari Neptune, is an American Record Producer, Rapper, and Record Executive. He is the founder and CEO of Greek Beats LLC. He lives in Killeen Texas, and was raised in San Leandro California. Jhakari Neptune's sound can be described as an Atmospheric-Rhythmic Boom Bap of Hip-Hop and R&B. In 2019 Jhakari Neptune released his first solo album produced and written by him, Studio Tour gave listeners a broader understanding of him as an artist. Projects released prior to his first solo album were, 'Levels' a collaborative album between Jhakari Neptune and G.A Daniel released in 2018 and '#GasPedalShorty' by G.A Daniel has ten tracks produced by Jhakari Neptune with vocal features. You can discover a wide range of his beats being licensed around the world at Greekbeatsofficial.com; His music can please the soul and art of sound across many countries worldwide. “I’ve learned to never look how far the road is in front of me, but to look back on how far I’ve come”