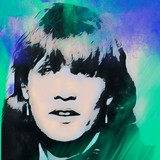 Jennifer was born in Frankfurt / Main and spends her time commuting between Frankfurt and London, the birth place of her mother. Her musical career began at the age of 13, when she started performing with various rock bands. She was one of the co-founders of the prog rock band OCTOPUS, and together they recorded 3 LPs at Sky Records and toured for 7 years. In 1982, she picked up the bass guitar and founded the power trio THE RADIO with Win Kowa. In the years to follow, Jennifer not only performed in over 400 gigs with Win, she also presented instruments and equipment from Sennheiser, Roland, Paiste and Slapper-Bass at Music Fairs in Frankfurt and London. In 1992, IC-Digit offered Jennifer and Win a recording contract. To date, together with „KOWA“ they have released 8 CDs. They were invited to take part in the productions of Cafe del Mar as well as collaborations with such artists as Dido, Mike Oldfield, Andy Summers, Kitaro and Vangelis. Alongside the CD productions, Jennifer has produced music for films and TV ads, which have won worldwide awards, e.g. the Golden Award of Montreux, Finalist Golden Globe NY and several Gold Comprix in London. In 2015, the seeds were sown for the 10 songs of her album „Slow Down“. The album reveals a very personal journey of love songs and short stories, performed by Jennifer herself, in a very calm timbre. The stories unfold in a relaxed, narrative manner and with an easiness that invites you in. https://www.JenniferKowa.com