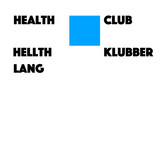 www.hlthclb.com In the beginning was the radio. And the sound. Over a century of listening. And then came the instruments. And the rehearsals and retreats. And then talk of revolution and a journey into the depths of the decibel. Health Club was born.

According to first-hand accounts and rumors alike Health Club is a rock-n-roll band. But we are here to tell you that Health Club is not simply a band, a punk-dada, performance troupe, a mere garage-grunge-psyche outfit. No, dear friends. Health Club is an invitation, a portal, a machine that processes your information. Health Club is a self-organizing entity. It assumed intelligence on multiple registers and in multiple garages and basements sometime in the spring of 2015. The exact timing is obscure. The origins draped in unknowing. A raucous roving system across the rolling hills of Lancaster County. Leaving nothing but traces. Joyously seething. Brooding and dancing. Drawing on the histories of popular music and jangly found sounds, Health Club churns and spins, recalibrates and deploys. That’s the source of their sonic revelation. For when the revelation occurs Health Club is changed in the process. You are changed in this process. The world is no longer the same.