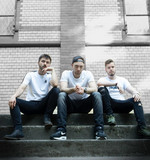 The producer trio Trias is made up of musicians Gerald Schollmayer, Florian Voit and Fettah Ekinci. They are known for their music in the realm of EDM Trap. In recent years, they have celebrated various releases with big labels in the EDM scene. Each has a different musical background and different music-making skills brought together by the fact that they are the only three boys from the village producing music. Their love for classical/cinematic music, electronic and hip-hop united them. This constellation and the effort they put into their projects now epitomized the epic, mystical and sentimental Trias. The three believe that music, like any other art form, is an eternal opus and that it can touch people even after a hundred years, no matter their background or belief. Music is timeless. Renewal is meaningful to them. They find it important to keep their music alive by adding new elements and ideas each time. In the past few years, the trio has received attention from the biggest labels and channels for electronic music like Trap Nation, Trap City, Lowly Palace, BredNButter and xKito Music, to name a few. They have also reached over 40 million plays and views across several platforms, including YouTube, SoundCloud and Spotify. In the future, they have plans to work on many more projects with other artists. Their focus is on trying out and integrating different music styles. In order to keep up with the latest about Trias and their music, follow them on social media.