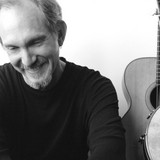 BRUCE MOLSKY -FIDDLE BANJO GUITAR & SONG Grammy-nominated, and “one of America’s premier fiddling talents” (Mother Jones), Bruce's take on tradition has landed him in collaborations with some of the world's most highly respected players from roots to rock. He is a special guest on Mark Knopfler’s recent CD, “Tracker.” 1865 Songs of Hope & Home w/ Anonymous 4, was on Billboard’s top 10 for weeks, the 3rd record with Andy Irvine & Donal Lunny’s supergroup Mozaik is in the works, and you can see Bruce on BBC TV’s Transatlantic Sessions with Aly Bain & Jerry Douglas, and on “David Holt’s State of Music” airing nationally. His new trio Molsky’s Mountain Drifters, includes banjo powerhouse Allison de Groot and genre-defying Stash Wyslouch on guitar. Their self-titled CD has been released to great acclaim and the new one is the works. He is Berklee College of Music American Roots Visiting Scholar -- Bruce comes at southern roots with great depth of spirit, passion, and respect for the past. His wide-angled approach to traditional folk music has been infused by rhythms and melodies from around the world and he in turn is influencing a new generation of players.