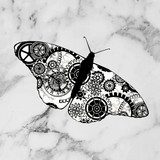 Averlanche is a Helsinki-based melodic metal band, founded in 2017. Averlanche combines catchy melodies with beautiful female vocals. Their sound is influenced by Finnish heavy metal music from the 90's and early 2000's. Averlanche released their first demo EP The Machinery of Life in fall 2018. In 2019 it was time to record their first full-length studio album. The band contacted producer Hiili Hiilesmaa, who has been working with bands like HIM, Moonsorrow and Sentenced. In September 2019, the band recorded their debut album Life’s Phenomenon at Studio Watercastle with Arttu Sarvanne. The first single “The Sounds of Insomnia” was released on the 15th of May 2019 and included a German version of the song on the B-side. The second single “Circus” came out soon after on the 7th of August. In September they shot their first music video for the song “The Diamond Hills”. The video was released together with the album on the 6th of November 2019. Averlanche is currently rehearsing new songs for their second studio album.