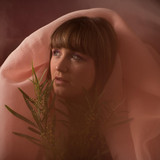 Cherilyn MacNeil was born and raised in Johannesburg, South Africa. In 2010 she moved to Berlin after signing with respected Indie label, City Slang. For 12 years she has been making Pop music as Dear Reader. She has released 4 studio albums and recorded a live album with the Babelsberg Film Orchestra. She is currently working on a community project called Dear Sender - a community collaboration project where Dear Reader fans send in audio samples, videos and texts, and Cherilyn uses the material to create new music. The first song to be born this way is called "So Much Deadly".