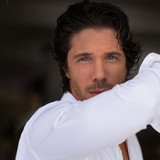 Undeniably - the best Greek voice of his generation. Born and raised in Patra, he made the first big step of his musical journey on the television show “Dream Show – The Music” in which he was announced the winner. His first studio album “Proti Agapi” was released in 2007. Since then he has released a total of 10 albums and all of them have been one big challenge after another and he has met each one in thrilling style. Nikos Oikonomopoulos has the musical intention to release music that is always authentic and comforts directly to the heart of his audience. After all, his deep faith in God is a crucial factor in his singing career.