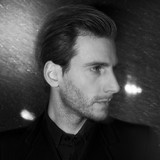 Maximilian Hecker is a Berlin-based German musician known for airy pop music, similar to Radiohead, Sigur Rós and Nick Drake. After performing as a drummer in a number of small German bands, and after one year of making music in the streets of Berlin, his demo tapes attracted the attention of famous record label Kitty-yo Records, who released his debut album Infinite Love Songs in 2001. The album was very well received worldwide and even reached the top ten list of the New York Times’ album of the year contest in 2001. Hecker, who has over the years become more and more famous in East Asian countries like South Korea, China, Hong Kong and Taiwan, has worked with several other record labels besides Kitty-yo Records, like V2 Records, PIAS, Pastel Music and Gold Typhoon Music and has played about 19 Asian and 12 European concert tours. Working with producers like Youth (The Verve, Embrace, Paul McCartney), Gareth Jones (e.g. Depeche Mode) and Guy Sternberg (e.g. Jimi Tenor), Hecker has released nine studio albums to date. In 2019, Hecker released two duets – one with American singer-songwriter Rachael Yamagata, the song HEADSTONE in April this year; the other one, a love ballad called THE FLOWER in June this year, a song written for and partly together with 정택운 a.k.a. Leo from the group VIXX.