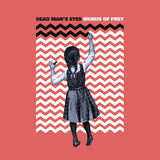 Dead Man's Eyes is a five piece rock group based in Cologne/Bonn, Germany. Their style is often referred to as psychedelic or indie rock. Their songs feature up to three electric guitars, bass, drums and keys combined with polyphonic vocals. In 2018, they released their debut album Words Of Prey in cooperation with Tonzonen Records. On stage the band delivers a highly professional, energetic and yet atmospheric performance. They played international festivals and shared the stage with well-known bands such as Tame Impala. Dead Man's Eyes is currently recording a new album which is set to be released 2021.