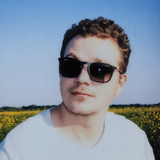 Joe Hauke is a London based producer, keyboardist and songwriter. His music combines soulful jazz with melancholic hip-hop, occasionally touching on 80’s and 90’s inspired funk and RnB. Having played in bands at headline shows including Live at Leeds, o2 Academy Islington and countless UK festivals and venues, Joe has honed his musicianship skills over 15 years before starting to release official music in 2020. After cutting his teeth in production in his teenage years, Joe attended Leeds College of Music where he met and worked with a variety of talented instrumentalists and producers - developing a more urban, soulful sound in his playing and productions. After moving back to London, Joe started working on an intense period of gigging and collaborations across the UK before returning to his solo productions. His first official release ‘Roses’ was released in July 2020 - a melancholic, jazzy lofi track which paved the way for his first EP project: 'Home' in October 2020. Produced during lockdown from his bedroom in South East London, it is a culmination of a year exploring his musical voice through lofi beats; incorporating mellow, broken-beat and jazzy hip-hop. Joe’s second single ‘Poolside’ came in October 2021 - a funk-infused RnB jam inspired by the sounds of Patrice Rushen, D-Train and The Gap Band. He is currently working on his first full length album.