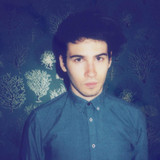 Born in 1993 within the eastern suburbs of Rome, Marco Barzetti already wrote and produced two albums under the moniker Weird. – while providing lyrics and guitars for psych maven Sonic Jesus. Lately he played more than a hundred gigs throughout Europe, sharing stages with Black Angels, The Underground Youth, TOY, Girls Names, Disappears, The Veldt. Back to everyday life he improvised a bunch of songs while moving home, switching jobs: old memories emerged and melt up with frustrations, new visions and hopes. Still with no instrument around all the music sprout up in his head, so that right after one year a whole new album was ready. A new identity had to be found – and that’s how True Sleeper was born.