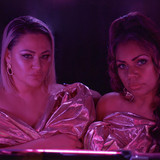 You’re dancing under the stars, living your best life and The Merindas are playing. You’re channelling your most favourite girl groups of the 90’s TLC, Destiny’s Child and Salt n Pepa. The Merindas, with infectious energy, strut onto the stage with their soaring vocals, engaging persona with double the amount of swagger and sass. Melbourne based duo, The Merindas are set to trail-blaze their innovative style of Indigenous music. They describe their unique sound as “electronic pop with a dance-hall feel, alongside hip hop and R&B influences.” Garnering rave reviews on the live circuit, playing festivals and major events across Australia has led them to support some of Australia’s biggest stars including US Grammy Award-winning artist Brandy and UK artist Craig David. With several singles under their belt, their hotly anticipated debut album We Sing Until Sunrise (“Ngangk Ngoorndiny Ngala Warangka" - strongly reflects that we are forever singing, forever dancing and forever celebrating our culture”). Keeping culture alive and strong through language and song, the album was released in June 2020. The Merindas new single 'DEJA VU' is out now.