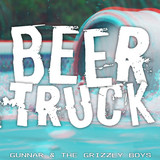 Gunnar & The Grizzly Boys (GGB) have a name that rings true! A song that rang true, “Standard American”! And now they have an album of truly Good Rhythm

. . . GGB have fashioned a style that leader Gunnar Nyblad describes as, “Country music with a Michigan root.” After years of honing its live show, GGB feels “These Are The Good Times” with the release of its second album, Good Rhythm. It follows the success of “Standard American”, which has sold over 40,000 downloads in the U.S. and Canada, and has over 1.1-million YouTube views and 1.3-million Spotify streams. There’s an explosive energy at live Grizzly Boy shows, as evidenced by their appearances at festivals, including last summer at Country Stampede in Manhattan, KS: https://www.youtube.com/watch?v=ifIC2uNpd0Q&feature=youtu.be Good Rhythm has been described as a diverse album that includes songs Gunnar wrote with Keesy Timmer (Kelsea Ballerini), Big Kenny (Big & Rich), as well as by himself and with bandmates.