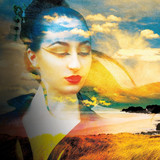 Eleni Violaris is a UK-based pop and classical-crossover singer/songwriter, who has performed and recorded with Ray Davies, Andrea Bocelli, Katherine Jenkins and Lesley Garrett. Eleni has recorded at Abbey Road, Air Lyndhurst and Angel Studios and has performed at the Royal Albert Hall, Royal Festival Hall, The Barbican, The London O2 Arena and the Birmingham NEC. Eleni, who plays the piano, flute and guitar (and who has a three-and-a-half-octave vocal range), has written, composed, produced and performed original music for landmark BBC productions. These include 'Francesco's Mediterranean Voyage' and 'Seven Ages of Britain', which have been sold and broadcast in over 100 countries (together with a book and DVD), reaching an audience of over 800 million.