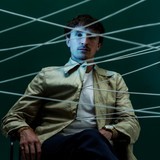 Ross From Friends, AKA British producer Felix Clary Weatherall, released his keenly anticipated second album ‘Tread’ on 22nd Oct via Flying Lotus’ label Brainfeeder. An artist who demonstrates an ever-increasing mastery of his craft, ‘Tread’ is a record that is at once sleek and melodic but also eminently danceable, nostalgic but brilliantly modern, with nods to sounds and styles that are not so much reflected but refracted and recontextualised through Clary Weatherall’s lens. This follows on from his debut album ‘Family Portrait’—hailed as “a powerful debut” by Crack Magazine and was described by Mixmag as “a gliding and glittering tour de force” in their ‘Albums of the Year 2018’ roundup. More recently, Clary Weatherall launched his own label Scarlet Tiger as an outlet for releasing his own productions alongside “friends and folk I’ve met online over the years”, marking the inaugural release with his own ‘Burner’ single in January 2021, followed by an EP from RFF band mate Cameo Blush, and most recently by an EP from Giulia Tess. A cornerstone of Ross From Friends music has always been the Ross From Friends 3-man live show, that delivers a killer blend of live musicianship (guitar, keys and sax) and electronics and has graced stages at the likes of Coachella, Glastonbury, Primavera and Sonar to name a few. The trio are returning in 2022 for a headline tour in the UK, Europe and North America.