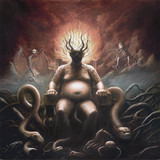 What kind of darkness blends the best? Does it emerge from rituals beyond the great plains or from tales of the old and mystic way? Maybe the deep abyss in oneself's violently miserable endurance? The controversy surrounding this profound concept becomes evident by aeons upon aeons of clashes between the righteous and the curious, dwelling in the shadows just beneath the surface. Nekrokraft thrive on delivering this kind of emotions through their swedish melodic blackened metal, forged by an ungodly quintet dawned in Linköping 2012. The band has an underground foundation that meets with the modern take on extreme metal, a unique modern vintage sound crafted with riffs, atmosphere and melodies. As one read the lyrics it would become apparent that it generally tend to revolve around occultism, folklore and borrows inspiration from timeworned mythologies dire to stay remembered. In 2016 Nekrokraft was signed to The Sign Records rooster and released their first mini album “Will o’ Wisp” later the same year. The troupes first full length album “Servants” as well as a remaster of the early days “Witches Funeral” compilation were issued in the fresh days of spring 2018. With appearances on major festivals such as Sweden Rock Festival and Gefle Metal Festival, at a broad array of venues and two Europe tours so far, the thirst for turmoil remains unquenchable. “We’re all about witches brew, the fucking woods and thrashing through the boundaries of hell" - Nekrokraft