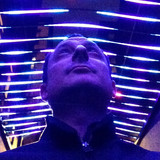 Dan Lipton is a pianist, songwriter and composer based in NYC. Jukebox Saloon Vol. 2, his latest album of inventive re-arrangements with Colby Beserra, is out now on Yellow Sound Label. His score for the Orion feature film All These Small Moments starring Molly Ringwald and Jemima Kirke was released by Mother West in 2019. He performs regularly in concert halls across the US and around the world with Tony-winning actress Kelli O'Hara, accompanying her on piano, leading her band and providing many of her arrangements and orchestrations. Other DL recordings: Jukebox Saloon, Zeitgeist, Life In Pictures, Travelogue. As a musician, he appears on the original Broadway cast recording of Sting's musical The Last Ship, as well as albums by Kelli O'Hara, John Lithgow, Judy Kuhn, Kris Gruen, Northern State, Nova Social and many more. He's performed with a wide range of artists, including Sting, Audra McDonald, BD Wong, Brian d'Arcy James, Duncan Sheik, Martha Plimpton and Ethan Hawke.