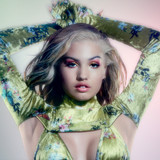 An effortless storyteller with a pure and unfiltered singing talent and songwriting ability, Mabel McVey has an instinctive gift of melody far beyond her twenty three years. Indeed Mabel has made quite the impression since bursting on to the scene in September 2015 with her release‘Know Me Better’. Quietly released onto Mabel’s personal SoundCloud, the single didn’t remain a secret for long, putting the wheels in motion for Mabel to become a fresh and exciting name amongst a brand new generation of r’n’b chanteuses. In the three since, Mabel’s growth (musically, emotionally, visually) has been extraordinary. Her formative material led to the surprise breakthrough of ‘Finders Keepers’ in 2017, which went platinum,