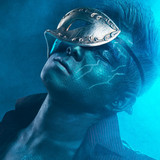 Jesse Neo is a twenty-year-old British-Australian singer, songwriter, DJ and producer that blends Eurodance, pop and a hint of new wave into a stylish, cool sound where the various stylistic elements intersect. The twenty-year-old British-Australian commenced violin, voice and piano lessons when he was seven. Within months he was composing original music. By the time he was eighteen, he’d composed over 100 songs. Now living in the Land Down Under, “where women glow and men thunder,” he composes full time.