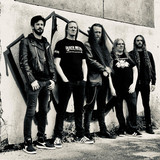 Formed in 1989 by Darren Brookes, Peter Rew, Barney Greenway, Ian Treacy and Paul Adams, and after many years doing the rounds under other names, BENEDICTION, as we know it, was formed. The band was quickly picked up by German Metal label Nuclear Blast Records, a partnership that lasts to this day. Their first album, Subconscious Terror, was released in 1990. In October 2001, they released “Organised Chaos” the first album with Dave Hunt as vocalist. Their latest album “Killing Music” was released in 2008. In 2019 the return of classic singer Dave Ingram was announced. Ingram, vocalist on some of BENEDICTION’s classic early releases such as “The Grand Leveller”, “Grind Bastard” and the groundbreaking opus that is “Transcend the Rubicon”, often classed as one of the most influential and important death metal releases to date. With the current line-up, BENEDICTION are without doubt stronger than ever.BENEDICTION line up: Darren Brookes - Guitar Peter Rew - Guitar Dave Ingram - Vocals Dan Bate - Bass Giovanni Durst - Drums