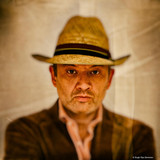 Born in Mortsel, Belgium, Bart Peeters is a well-known and well-liked drummer, presenter, actor, and singer in his native Belgium, who got his start in the music business with the band the Radios in the 1980s. His solo career got started in 2004 with the release of his first album, Het Plaatje van Bart Peeters (or, in English, The Record of Bart Peeters). His second album, Slimmer dan de Zanger (More Clever Than the Singer) was released in 2006, and his third hit album, De Hemel in het Klad (Draft of Heaven), hit stores in 2008. It quickly rose to the top of the Belgian charts, cementing the legacy of this Flemish performer. In addition to his musical success, Peeters has made a large number of regional television appearances. ~ Chris True, Rovi