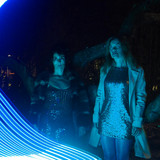 Pipaluk and Cecilie are from Copenhagen, Denmark. They made their first punk band in high school. Later on Pipaluk lived in Paris doing mime and Cecilie was acting in New York, but when ever they met, they would sing sad songs together. Back in Copenhagen they formed the dark pop duo Pipaluk & Cecilie Supernova. First album "Call Now" from 1994 is a minimalistic bedroom like recordings with personal and dramatic love songs, "Leave a message" from 1996 and "The number you've diallled has been disconnected" from 2002 are more trip hop and shoe gaze, songs about the urban loneliness and global longing. Pipaluk and Cecilie are recording new songs at the moment, some of which you can find on https://soundcloud.com/user-803886369 New atmospheric songs with noisy and dreamy guitars and entangling female vocals. Dark protest songs with lyrics about climate change and surveillance and the realm of money. And Love and Death. Foto by Henriette Lykke 2019.