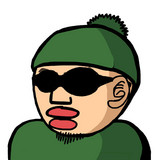 Hailing from Tokyo, Japan the musician Ugazin is a multifaceted maverick in the world of electronic music. He was the lead guitarist and songwriter of a popular pop band Dev Parade that debuted in 2000. Having composed the theme song “Bacchikoi” of the popular anime “Naruto”, Ugazin has won huge acclaim and fanbase in Japan. As an independent artist, Ugazin has been working on a variety of projects, showcasing his extensive skills in the entertainment industry as an excellent overall performer. He has built a genre on his own as an artist who makes club music using an electric guitar. Throughout his musical career, the multi-talented musician is known for distinguishably catchy music, charisma, and energy and his work on the anime Naruto, SUMMER SONIC 2008 appearance and so on.