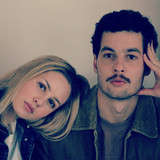 The Money War are Dylan & Carmen Ollivierre, a songwriting duo from Western Australia. Since their formation in 2016, their success has seen them tour nationally with the likes of Meg Mac, Dope Lemon, Holy Holy and Neil Finn, who hand-selected them to open for him after hearing their music. They have also appeared on a number of festival lineups both at home and abroad (Southbound, FOTSUN, SXSW). They’ve amassed over a million streams and multiple playlist adds on Spotify, secured airplay on radio stations across the globe including BBC6 (UK), KCRW (USA), NPR (USA) and cracked college radio charts in the US. In Australia they’ve had multiple singles receive airplay on RTRFM, FBi, 4ZZZ and Double J, with their single ‘Recall’ taking out Triple J’s 5th most played track of 2017. Their latest album ‘Home’ was nominated for the Australian Music Prize in 2019, and they have also been nominated for multiple WAM Awards.

In addition to writing and recording as The Money War, Dylan also works as a producer and has written songs and worked in the studio with the likes of Meg Mac, Tia Gostelow, Tim Carroll (Holy Holy), Lucky Oceans and Riley Pearce. For fans of: Angus & Julia Stone, Middle Kids, Mazzy Star, Alabama Shakes, Garrett Kato, Alvvays, Whitney, Phoebe Bridgers