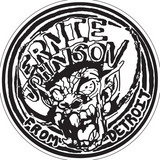 Since 2015, Ernie Johnson From Detroit have been performing their unique brand of afrobeat, funk, and jazz. Based in Cincinnati, Ohio, this nine-piece group is inspired by artists like Fela Kuti, James Brown, Mulatu Astatke, The Budos Band and Lettuce among others. The group recently recorded its first full-length album, Ernie Johnson From Detroit, at the legendary Cyberteknics Creative Studio in Dayton, Ohio. It was mixed by neo-soul pioneer and Grammy-winning producer Russel Elevado, and mastered by frequent Daptone Records collaborators, Golden Mastering. The members of the group, or “Ernies,” have been friends and musical collaborators since 2012, and began to piece together their very personal collage of musical styles, inspired by tales of shared adventures and by all that is funky and tight. Since bringing their show to the stage, Ernie Johnson From Detroit has become a crowd favorite in Cincinnati, with a number sold-out shows under their belt. The band’s horn-heavy arrangements and relentless rhythm section allow for a variety of styles and a layering of dynamics in their improvised jams that make people want to dance.