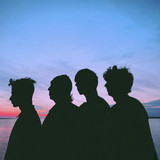 From Bushwick basements to opening slots for Blur and Interpol, the band Honduras has remained a fixture in Brooklyn's DIY community. Their propulsive, dreamy punk sound has been featured in Tony Hawk's skate videos and games as well as on the airwaves of Sirius XMU. Honduras has toured with pals Sunflower Bean and L.A. WITCH, and performed at festivals such as Philadelphia's Made In America. Taking inspiration from NYC's storied past, the band films the majority of its own videos and its members all reside in Brooklyn, NY.