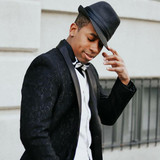 Robert Taylor Jr. is an American entertainer whose goal is to inspire and spread love and peace to people of all ages through music and dance. Robert was born in Brooklyn and raised in Coney Island and developed a love for music and dance as a young child.

In the underground music world, Robert has won multiple music showcases, including (2006-present) "Faces In The Crowd" (twice),