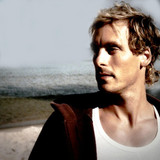 I’m a Swedish singer-songwriter with musical roots in the British and American folk-rock genre of the 60’s and the 70’s. I started playing music early, and the songwriting aspect became more important during the college years at Auburn University and the University of Southern California, where I received an athletic scholarship to represent the schools’ tennis teams. Growing up with music and tennis, I continued this combination after graduating, and with the guitar as a travel partner I went around the world as a professional tennis player, writing songs between matches on planes, trains and in hotel rooms. Since leaving the tour, I have been able to stay in one place for a longer period of time, which has given me a chance to dedicate myself more to music. I have spent most of the last 5 years in Italy, where I am involved in various projects, from acoustic duos to rockbands. In 2009 I came out with the album ‘Touch’, a blend of folk, blues, country and funk, and I am currently promoting my latest work called ‘Vagabond Stories’ produced together with Giampaolo Pasquile.